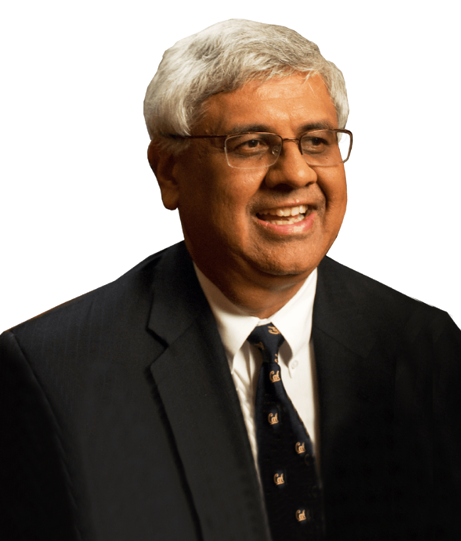 Dr. S. Shankar Sastry is currently the Thomas Siebel Distinguished Professor of Computer Science. He was till 2022 also the Director of the Blum Center for Developing Economies, a Center spanning the ten campuses of the University of California, dedicated to the use of technology and innovative business models to lift people out of poverty. He is also the Co-Director of the C3 Digital Transformation Institute (C3DTI), a data sciences institute spanning Berkeley, UIUC, CMU, Chicago, MIT, Princeton, Royal Institute of Technology, Stockholm, and Stanford. C3DTI is an institute aimed to develop the science and technology of digital transformation in societal systems such as in health care, energy systems, transportation systems. Additional he has helped launch a new FHL Vive Center for Enhanced Reality for exploring the boundaries between augmented reality and real scenes with applications to autonomy, performance arts, and education. He has faculty appointments in the departments of Electrical Engineering and Computer Sciences, Bioengineering and Mechanical Engineering. From 2007-2018 he was the Dean and Roy W. Carlson Professor of Engineering. From 2004 to 2007 he was the Director of CITRIS (Center for Information Technology in the Interests of Society) an interdisciplinary center spanning UC Berkeley, Davis, Merced and Santa Cruz. He has served as Chairman, Department of Electrical Engineering and Computer Sciences, University of California, Berkeley from January, 2001 through June 2004. From 1999-2001, he was the Director of the Information Technology Office at the Defense Advanced Research Projects Agency (DARPA) in Arlington, VA. Dr. Sastry received his Ph.D. degree in 1981 from the University of California, Berkeley. He was on the faculty of MIT as Asst. Professor from 1980-82 and Harvard University as a Gordon Mc Kay professor in 1994.

His areas of personal research are AI and Machine Learning, resilient cyber physical systems, mechanism design and incentive theory for the digital transformation system of complex societal scale systems networks, cybersecurity, autonomous robotic vehicles and robots, computer vision, nonlinear and adaptive control, control of hybrid and embedded systems. He is also deeply committed to the use of technology to lift people out of poverty as testified by his work with USAID, PhilDev, and other international foundations through his directorship of the Blum Center for Developing Economies. From 2006-2017 he led a ten year NSF Science and Technology Center (with multi-university partners), TRUST (Team for Research in Ubiquitous Secure Technologies) and its successor five year center 2013-19, FORCES (Foundations of Resilient Cyber Physical Systems).

He has co-authored about 600 technical papers. He has co-authored or co-edited 10 books, including Adaptive Control: Stability, Convergence and Robustness (with M. Bodson, Prentice Hall, 1989) and A Mathematical Introduction to Robotic Manipulation (with R. Murray and Z. Li, CRC Press, 1994), Nonlinear Systems: Analysis, Stability and Control (Springer-Verlag, 1999), and An Invitation to 3D Vision: From Images to Models (Springer Verlag, 2003) (with Y. Ma. S. Soatto, and J. Kosecka) and Generalized Principal Component Analysis (Springer Verlag, 2016 with R. Vidal and Y. Ma). Dr. Sastry served as Associate Editor for numerous publications, including: IEEE Transactions on Automatic Control; IEEE Control Magazine; IEEE Transactions on Circuits and Systems; the Journal of Mathematical Systems, Estimation and Control; IMA Journal of Control and Information, International Journal of Adaptive Control and Signal Processing; Journal of Biomimetic Systems and Materials, the IEEE Proceedings. Dr. Sastry was elected to the National Academy of Engineering in 2001 the American Academy of Arts and Sciences in 2004, Fellow of IEEE in 1994, and International Federation of Automatic Control Fellow in 2016.

He received the President of India Gold Medal in 1977, the IBM Faculty Development in 1983, the NSF Presidential Young Investigator Award in 1985. He got the Eckman Award of the American Automatic Control Council in 1990, the Ragazzini Award for Distinguished Accomplishments in teaching in 2005 and the Rufus Oldenburger Carrer Award of ASME in 2021.. He received an M. A. (honoris causa) from Harvard in 1994, an honorary Ph.D. from KTH, the Royal Institute of Technology, Stockholm in 2007, an honorary Ph.D. from the Royal Institute of Technology, Stockholm in 2008, a Ph.D. Honoris causa from the University of Waterloo, Canada in 2016, and a Laurea Dottorato honoris causa (honorary doctorate) from Politecnico di Torino in 2018, and the Berkeley Citation in 2018. He has also received the distinguished Alumnus Award of the Indian Institute of Technology in 1999, the International House at UC Berkeley, and the David Marr prize for the best paper at the International Conference in Computer Vision in 1999.

He has been a member of the Air Force Scientific Advisory Board from 2002-05 and the Defense Science Board in 2008 among other national boards. He has been on the Scientific Advisory Boards of the National Science Foundation, Engineering Directorate, Lockheed Martin Corporation and the United Nations Secretary General, the World Economic Forum Global Development Council, Interwest LLC, and Eriksholm Otticon. He is currently on the corporate boards of C3.ai, HCL Technologies, and Lexmark Corporation. He has supervised about 70 doctoral students and over 50 MS students to completion, as well as over 30 post-doctoral scholars. His former advisees occupy leadership roles on the faculties of many major universities in the United States and abroad.